The BP oil spill threatens to destroy an entire ecosystem. More than one, actually, since the coral reefs of the Florida Keys are now under threat. And the ocean floor, one mile deep, is an ecosystem as well.

But the benthic community is the ecosystem that is of the most urgent concern. The wafer-thin top two millimeters of mud in the coastal Louisiana marsh, made up of microscopic algae and invertebrates are what holds the marsh together and what provides the nutritional support for everything from shellfish, crabs and shrimp and eventually to gators and fish and ducks.

This information comes from an article printed in the Times-Picayune in New Orleans.

The tiny microscopic algae in the mud produces a sticky substance that helps bind the soils in the marsh, and thus is of huge importance as far as fighting the loss of the coastal land. 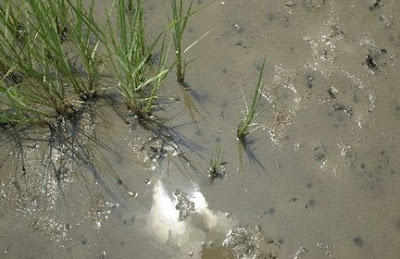 Marine biologists estimate that 97 percent of all marine species in the Gulf of Mexico depend on the estuaries at some point in their life cycles. 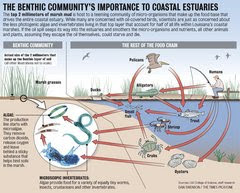 "It's an incredible engine for a wide range of life," said Kevin Carman, dean of the College of Basic Sciences at Louisiana State University.

How will it cope with the possibility of a covering of oil?

"If the toxic components of the oil kill those invertebrates foraging on the algae, then the algae will grow out of control," Carman said.

The algae eventually would form a thick mat over the marsh mud, preventing sunlight from penetrating below its surface.

"If the algae can't get sunlight, they die. If they die, the invertebrates have no food, and the whole web is disrupted."

There is no best-case scenario as far as the benthic community is concerned. Not if the oil reaches the marsh, which apparently it has, in some areas.