There is no better place to let your imagination run wild than in space. So when I came across this picture taken by the Cassini spacecraft during its exploration of Saturn, I wondered. Something is piercing the F ring of Saturn. 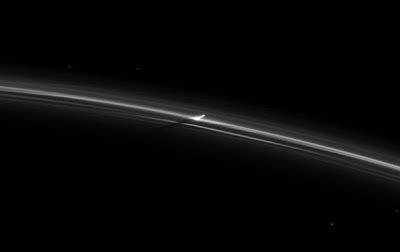 The blog post (on Discover) where I saw it was titled "Like the fist of an angry god," and that is a great place to begin to imagine what is really going on.

"I mean, seriously: what the hell happened here?"

I'm not a big fan of science fiction, but even I could make a story out of this, as the Saturnians might be sending a probe to try to figure out why the earthlings are destroying our own planet.

Or, as the "bad astronomer" speculates,

"Is this object on an orbit that intersects the rings so that it plunges up through them and then again down into them every time it circles Saturn? If so, how does that affect the rings overall, especially over millions of years?

"Or was this a singular event, some small object whose orbit was affected by a nearby massive moon, changing its path, putting it on a collision course with Saturn’s mighty and vast ring system?"

Here's a zoom of the event.

One of the comments on The bad astronomer suggests, "Fist? No, more likely evidence of Thor’s hammer being thrown around."

Open the link and read the post and comments. And wonder.
Posted by Joe at 6:00 AM

Looks like an ICBM launch... Or maybe a missile sent to intercept our peaceful Cassini probe. I always suspected that they posses WMDs. You know those Saturnians are a war-loving people. There are probably sleeper cells of illegal Saturnine jihadist living among us now, just waiting for a code word in some innocuous blog to launch their attach. They hate our way of life.