First, an update on the robins. They were scarce yesterday. I saw robins in the yard, but they were not on the nest. However, she was at the nest this morning. I will have to see what they do today.

Yesterday I was just in the right place at the right time for these shots. I was about to leave to go on an errand, and walked around the garage to close a gate, and a black blurry glob fell from the sky right beside me. It was a trio of carpenter bees.

Remember I said that the male carpenter bees have a white cuticle on their face. Here, a male is hovering in flight, intent on the male and female on the ground below him. 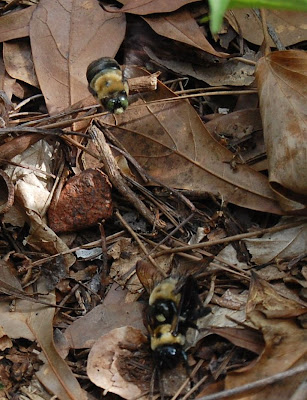 The male bee that is mounted on the female bee stayed put for about two minutes, making thrusting motions that one would associate with such an act.

The male who was hovering decides to make a move. Never mind that another male is already in position. 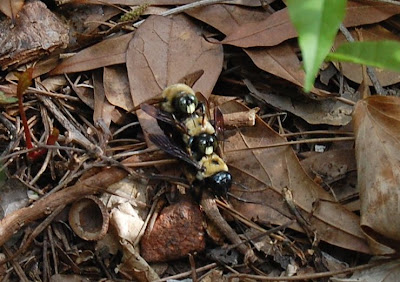 They stayed this way for about a minute, with both males thrusting somewhat. Then the second male, probably frustrated, flew off a few feet and returned to hovering.

Here is the female afterwards. She acted exhausted, and spent a couple minutes cleaning herself, it appeared. 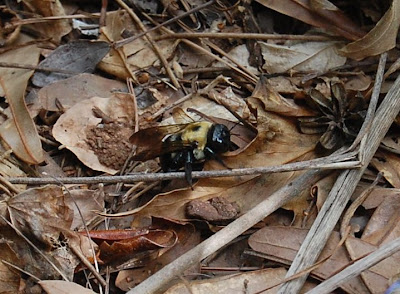 Here the persistent number 2 male is about to make his move again. 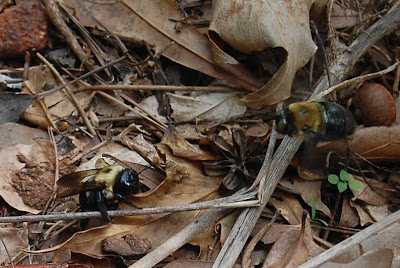 When he did, the female would make a fast and furious escape, or, if he mounted her, she would try to shake him loose. This went on for several minutes and then they flew off, the male in hot pursuit.


I don't know if they ever hooked up or if she lost him. But I do know that if things proceed as expected, there will be more carpenter bees soon.
Posted by Joe at 5:38 AM