Pollination is Science. Yesterday I mentioned that carpenter bees are pollinators. They generally don't have as much hair on their abdomens as bumblebees, and don't carry as much pollen from flower to flower. As bumblebees fly, their wing flapping creates an electrical charge and when they land on a flower, pollen is attracted and caught on the hairs. When they land on the next flower, the charged pollen is attracted to the stigma (female part of the flower)because it is better grounded than the rest of the flower.

This carpenter bee is enjoying wisteria. I will try to get some bumblebee pictures later in the season. 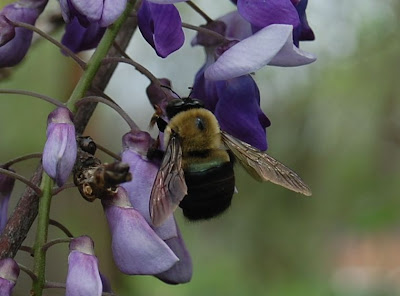 We are all familiar with the honeybee (Apis sp), and this was the only one I saw on this day. 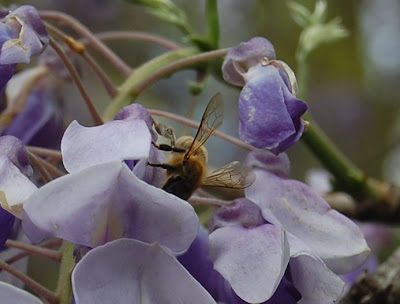 Honeybees are the most important commercial pollinator and are undergoing a decline for which the cause is not known. Colony collapse disorder may be caused by natural causes like mites or parasites, environmental factors such as climate change, or agricultural practices like pesticide use. It could be a combination of factors. Whatever it is, know that the concern is great and the research is furious to determine a cause. The symptoms include lack of adults in the hive with few or no dead adults present, capped brood present in the hive (bees usually won't leave until all adults have emerged) and food stores in the hive. 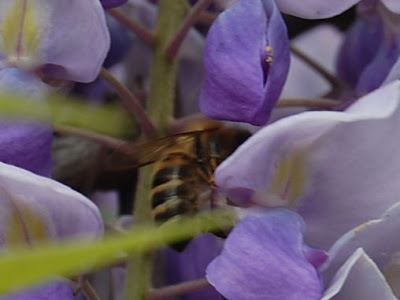 I can't tell you what kind of bee this is, but she is smaller than a honeybee. There are many species of bees. Some are tiny. 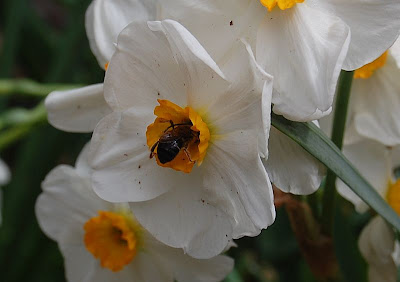 Wasps are important pollinators of some plants. Wasps are also plentiful and vary by species, and I have not identified this one. Adult wasps feed on nectar, and, oddly enough, many agricultural insect pests have a wasp species as an enemy. The female wasp lays eggs in the immature insect (caterpillar, for instance) and the wasp larva matures feeding on the host. Some wasps also feed on fruit or carrion. 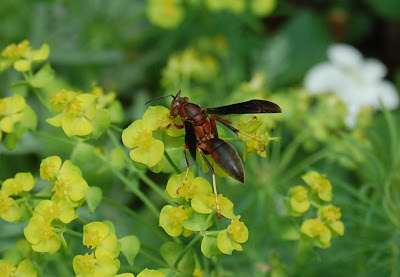 The wind is a pollinator. We have been fortunate over the last few days to have rain which washed a lot of the pollen from the air and off of our cars and decks. Many of us have seen pine pollen being blown from pine trees in clouds of yellow. Anemophily is the term for wind pollination. Some crops, such as corn, and grasses are anemophilous. With corn, bees may still visit and get what they can, but wind is the primary method of pollination. 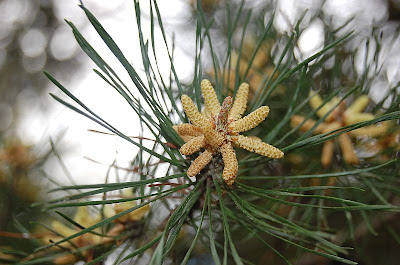 I will write more about honeybees and Colony Collapse Disorder in the future.
Posted by Joe at 11:16 AM