What this blog is about...Science!

I also post at Bessemer Opinions and there you might find a crazy mix up of politics, science, flowers, religion, human rights, art and music. You still will, but I take a lot more pictures and research a lot more science than you will ever see there. So a lot of the pics and science stuff will go here.

All the science won't come from Bessemer, but some will. But I might write about embryonic stem cells or planets in our solar system. This blog will be tweaked over the next few weeks with some neat apps.

Lizards are science. This is a Green Anole (Anolis carolinenses), commonly and mistakenly called a chameleon. They are in the Iguanid family. They lay single eggs about every fourteen days from April to September in leaf litter, trash or debris. Incubation takes 5-7 weeks. The babies are on their own. And cute, too. 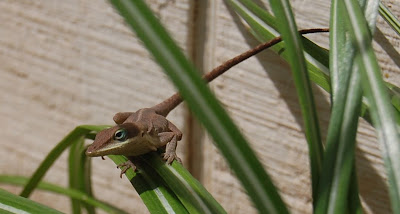 They change color depending on mood and temperature and stress. When I moved from Bluff Park I caught several of these and released them in the yard here in Bessemer. I don't know if these are descendants or if there was already a population here (most likely) but I like to think the ancestors of these came with me. 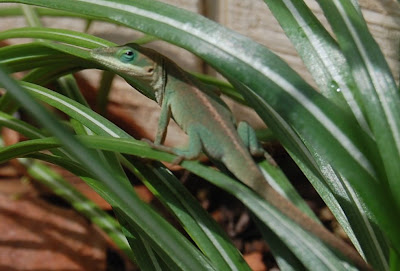 How do they change color? A Cornell scientist explains:

Green anoles aren't able to control their color changes to the same extent that chameleons are. They change in between various shades of brown and green depending upon stress levels, colors in their surrounding environment, and temperature. A light green anole is generally active, happy, and stress free. When they are mildly stressed, or when they become sleepy and tranquil, they may become light brown. This change in shade from brown to green is caused by cells that contain melanin, the same pigment that is responsible for different human skin colors. These melanin-containing cells are highly branched and spread throughout the skin. When the anole is brown, the melanin in the cell is allowed to fill all the branches, masking the greenish cells beneath. When the anole is green, the melanin is concentrated at the bottom of the cells, so the green colors show through the transparent branches.

Bees are science. This is a Carpenter Bee (Xylocopa virginica, most likely). They hang around our back deck because they enjoy boring into a wooden bench to make their hibernaculum, or nest. They also like the garden shed. Males often hover in anticipation of mating or warding off other males. I don't know what this one had in mind. Males have the white cuticle on their face, you can see it in this photo. Males don't sting. 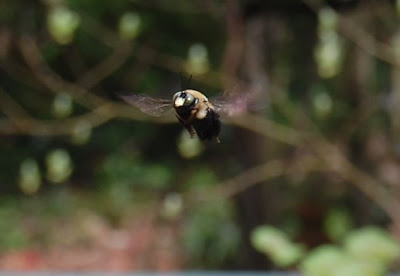 They can be important early spring pollinators, especially with other pollinators in decline. 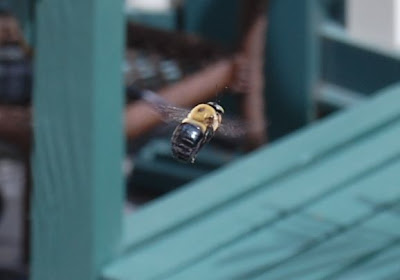 I hope they don't bore into the giant rocker. I think the deck and railings are safe. They are not wood. 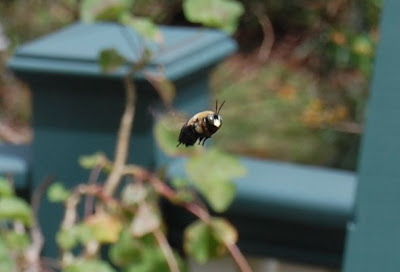 Females do the boring and build the nests. Males just hang around flowers (thinking they might happen upon a female that needs a mate) or guarding their territory. Food and sex, sound familiar? 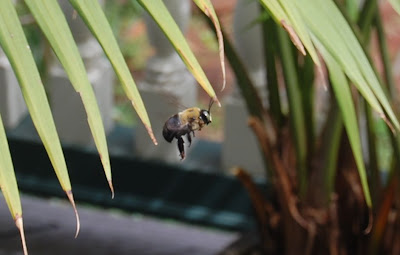 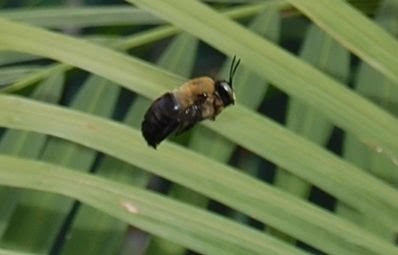 Flowers are science. Here are two Tulips that are blooming. Tulips don't do particularly well here, but these were here in 2000 when I bought the house, and bloom every year. 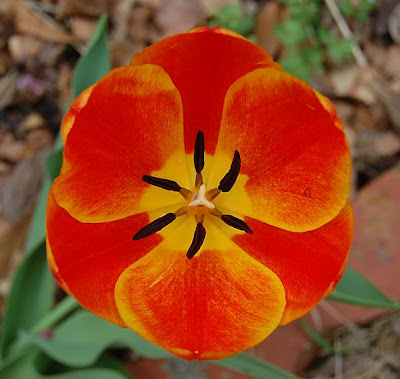 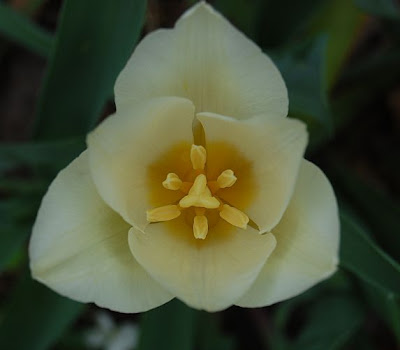