Dr. Susan Solomon gave a wonderful informative presentation last night at the UAB 2009 Ireland Distinguished Visiting Scholar Lecture last night. Dr. Solomon was very complimentary toward the city and the University for our supposed interest and understanding of the issue of climate change.

I really feel it is a privilege to hear such a renowned person speak on the subject.

One thing she said that surprised a lot of people is that there are areas of the world where cooling is taking place. The south east United States is one. South of Greenland is another. Look at this map, which shows trends from 1901 to 2005. This may or may not be the same map she showed, but it shows the same thing. The blue areas indicate a cooling trend. The reason, she suspects, for the cooling in the south east is due to the re-forestation of so much land. And warming in the south east will catch up over the next few decades. 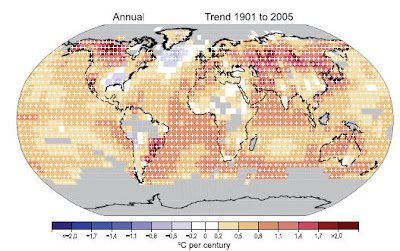 But the little blue spots are surrounded by the big red areas. Sort of like Jefferson County. Sort of like...

But there I go, getting political.

I don't really have room or time to put forth an argument that climate change is real and is influenced by the actions of man. People who do not recognize this are just either dumb, don't care to look at facts, want the world do die or are looking to make a buck.

Like Dr. Solomon says, though, this is not a political issue, and we need to separate what we believe from what we know. That's why you just find the facts of science here. And the fact is, global temperatures are rising. Look at the last 150 years. See a trend? 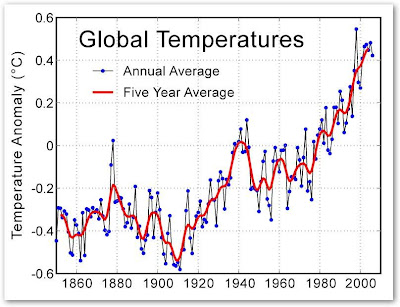 As Dr. Solomon pointed out, there are many anecdotal facts about weather and temperature that are used to deny science, but while they may be true, they are not relevant. Climate change is not about weather, it's not about what happens this year and next.