Habits of anoles (and herpetology students) are science. I can't exactly claim that riding on the hoods of cars is habitual for anoles, but something told him to leap up on the front of the car, unknown to us. These pictures, from inside the vehicle, were taken about 9 blocks from our home, when a green anole, Anolis carolinensis, popped up onto a windshield wiper. I assume he had hitched a ride from home. 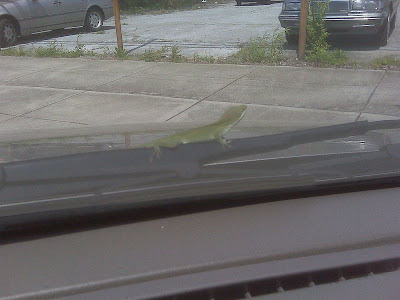 My hope was that he would stay on the car (he disappeared under the edge of the hood when we resumed travelling) until we got home. Of course that would mean staying put while we ate lunch at Popeye's. 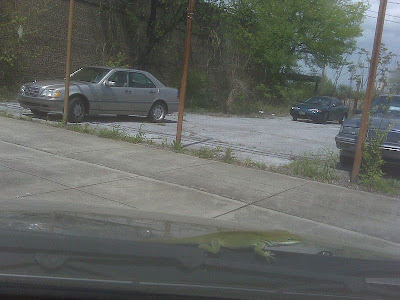 When we got home I found him, brown by that time, squeezed into a cranny of the wiper apparatus. I prodded him out with a twig and got him over to the fence, where he belonged.

I wonder what he told his buddies.

Riding on the hoods of cars was habitual for students of Dr. Robert Mount at Auburn. Dr. Mount was my professor at Auburn for some herpetology instruction. Part of our training involved capturing and identifying various species of reptiles and amphibians, and one of the best ways to catch certain salamanders was to drive slowly along country roads at night, while a student or two sat on the hood looking for critters crossing the road. (Why does the salamander cross the road?) Frogs are sometimes captured this way as well.

From Dr. Mount's book, The Reptiles & Amphibians of Alabama:

"Salamanders of the amphibian variety are secretive in habit and are most often found in damp places under logs, rocks, or in piles of debris. On wet nights they move about in the open and may be spotted with a light."

We took "open" to mean "open road" and "light" to mean "headlight".

Some salamanders such as the spotted salamander prefer temporary woodland ponds and other flooded areas for breeding. Often these are beside the roads, so we assume the salamanders are crossing the roads in search of a love pond.

Anyone up for a hunt?

Do you know Why the chicken crossed the road?

To show the racoon that it could be done.

When I was a kid growing up in Puerto Rico I used to catch these anoles (we call them lagartijos), and flick them in the head until they got mad (their skin turned dark) and opened their mouths to bite. I would then slide my earlobe into their mouth and they would bite down on it (it didn't hurt). Once I had one dangling from each ear I would run in the house and chase my terrified mother and sisters around the house.... Ah, good memories!