Gravity Waves are Science. Uncommon, but science. I remember we had this happen back in the late 90's when I lived on the edge of Shades Mountain and we thought we were going to blow off the crest.

Gravity Wave
A wave created by the action of gravity on density variations in the stratified atmosphere. A generic classification for lee waves, mountains waves, and many other waves that form in the atmosphere .

Here is a video of such an occurrence.

What happens is there is a large area of rain, a thunderstorm. On the back side of the storm, some drying occurs in the middle layers of the atmosphere. An updraft of air occurs and this disturbs the atmosphere. The air runs into a stable air mass and is redirected downward. When those winds near the surface, they spread out, producing the high winds that cause the damage.

Gravity waves can really be serious when they occur in conjunction with a tornado. In April 1998, the tornado that caused so much damage and killed 32 people in and around Oak Grove near Birmingham was a relatively weak tornado until it was hit by an undular bore, a type of gravity wave, which amplified it into an F5 killer.

Gravity waves are difficult to predict. The damage can be substantial. Many people had it worse than us, we just had a neighbor's tree fall into our yard. 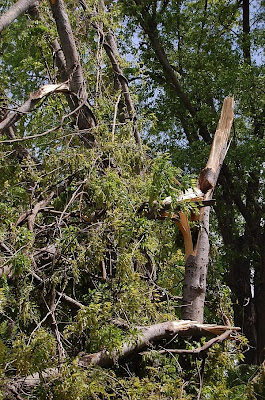 But another neighbor had this happen. Remarkably, there is minimal damage to the house. 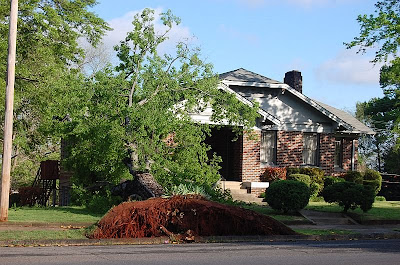 is that the same as or akin to wind shear?

I think wind shear is a much more limited phenom, occuring over short distances.